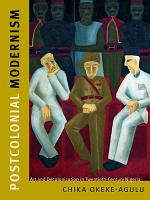 Description : Written by one of the foremost scholars of African art and featuring 129 color images, Postcolonial Modernism chronicles the emergence of artistic modernism in Nigeria in the heady years surrounding political independence in 1960, before the outbreak of civil war in 1967. Chika Okeke-Agulu traces the artistic, intellectual, and critical networks in several Nigerian cities. Zaria is particularly important, because it was there, at the Nigerian College of Arts, Science and Technology, that a group of students formed the Art Society and inaugurated postcolonial modernism in Nigeria. As Okeke-Agulu explains, their works show both a deep connection with local artistic traditions and the stylistic sophistication that we have come to associate with twentieth-century modernist practices. He explores how these young Nigerian artists were inspired by the rhetoric and ideologies of decolonization and nationalism in the early- and mid-twentieth century and, later, by advocates of negritude and pan-Africanism. They translated the experiences of decolonization into a distinctive "postcolonial modernism" that has continued to inform the work of major Nigerian artists.

Description : This book is about the contemporary picaresque novel. Despite its popularity, the picaresque, unlike the bildungsroman, is still an undertheorized genre, especially for the context of postcolonial literatures. This study considers the picaresque novel’s traditional focus on poverty and deprivation, and argues that its postcolonial versions urge us to conceive of as a more wide-ranging sense of precarity and precariousness. Non-linear biography, episodic style, protean identities, unreliable narratives, and abject landscapes are the social and formal aspects through which this precarity is thematized and performed. A concise analysis of these concepts and phenomena in the picaresque provides the structure for this book. What is especially significant in comparison to other forms of postcolonial (post)modernism is that the picaresque does not offer a general critique of a project of modernity, but through its persistent precarity points to the paradoxical logics of capitalism, which are especially nuanced under the conditions of neo-imperialism and neoliberalism. The book features texts by established postcolonial authors such as Salman Rushdie and V.S. Naipaul, but especially focuses on the more recent proliferation of the genre in works by Aravind Adiga, Mohsin Hamid and Indra Sinha.

Description : As England withdrew from its empire after World War II, how did writers living outside the United Kingdom respond to the history of colonialism and the aesthetics of modernism within a global context? In fourteen original essays, edited by Richard Begam and Michael Valdez Moses, a distinguished group of scholars considers these questions in relation to novelists, playwrights, and poets living in English-speaking countries around the world. Modernism, Postcolonialism, and Globalism not only examines how modernism and postcolonialism evolved over several generations, but also situates the writers analyzed in terms of canonical realignments inspired by the New Modernist Studies and an array of emerging methodologies and approaches. While this volume highlights social and political questions connected with the end of empire, it also considers the aesthetics of postcolonialism, detailing how writers drew upon, responded to and, sometimes reacted against, the formal innovations of modernism. Many of the essays consider the influence modernist artists and movements exercised on postcolonial writers, from W. B. Yeats, Joseph Conrad, Franz Kafka, Marcel Proust, James Joyce, T. S. Eliot, and Virginia Woolf to Impressionism, Expressionism, Surrealism, and Abstractionism. Modernism, Postcolonialism, and Globalism is organized around six geographic locales and includes essays on Africa (Chinua Achebe, Ngugi wa Thiong'o, Nadine Gordimer, J. M. Coetzee), Asia (Salman Rushdie, Arundhati Roy), the Caribbean (Jean Rhys, Derek Walcott, V. S. Naipaul), Ireland (Samuel Beckett, Seamus Heaney), Australia/New Zealand (David Malouf, Keri Hulme) and Canada (Michael Ondaatje). Examining how Anglophone writers engaged with the literary, intellectual, and cultural heritage of modernism, this volume offers a vital and distinctive intervention in ongoing discussions of modern and contemporary literature.

Description : This book provides a fresh account of modernist writing in a perspective based on the reading strategies developed by postcolonial studies.

Description : This collection of essays by renowned literary scholars offers a sustained and comprehensive account of the relation of British and Irish literary modernism to colonialism. Bringing postcolonial studies into dialogue with modernist studies, the contributors move beyond depoliticized appreciations of modernist aesthetics as well as the dismissal of literary modernism as irredeemably complicit in the evils of colonialism. They demonstrate that the modernists were not unapologetic supporters of empire. Many were avowedly and vociferously opposed to colonialism, and all of the writers considered in this volume were concerned with the political and cultural significance of colonialism, including its negative consequences for both the colonizer and the colonized. Ranging over poetry, fiction, and criticism, the essays provide fresh appraisals of Joseph Conrad, T. S. Eliot, Ezra Pound, Virginia Woolf, D. H. Lawrence, Wyndham Lewis, E. M. Forster, W. B. Yeats, James Joyce, Elizabeth Bowen, Hugh MacDiarmid, and Evelyn Waugh, as well as Robert Louis Stevenson and H. Rider Haggard. The essays that bookend the collection connect the modernists to their Victorian precursors, to postwar literary critics, and to postcolonial poets. The rest treat major works written or published between 1899 and 1939, the boom years of literary modernism and the period during which the British empire reached its greatest geographic expanse. Among the essays are explorations of how primitivism figured in the fiction of Lawrence and Lewis; how, in Ulysses, Joyce used modernist techniques toward anticolonial ends; and how British imperialism inspired Conrad, Woolf, and Eliot to seek new aesthetic forms appropriate to the sense of dislocation they associated with empire. Contributors. Nicholas Allen, Rita Barnard, Richard Begam, Nicholas Daly, Maria DiBattista, Ian Duncan, Jed Esty, Andrzej Gąsiorek, Declan Kiberd, Brian May, Michael Valdez Moses, Jahan Ramazani, Vincent Sherry

Description : This book considers the shifts in aesthetic representation over the period 1885-1930 that coincide both with the rise of literary Modernism and imperialism's high point. If it is no coincidence that the rise of the novel accompanied the expansion of empire in the eighteenth-century, then the historical conditions of fiction as the empire waned are equally pertinent. Peter Childs argues that modernist literary writing should be read in terms of its response and relationship to events overseas and that it should be seen as moving towards an emergent post-colonialism instead of struggling with a residual colonial past. Beginning by offering an analysis of the generational and gender conflict that spans art and empire in the period, Childs moves on to examine modernism's expression of a crisis of belief in relation to subjectivity, space, and time. Finally, he investigates the war as a turning point in both colonial relations and aesthetic experimentation. Each of the core chapters focuses on one key writer and discuss a range of others, including: Conrad, Lawrence, Kipling, Eliot, Woolf, Joyce, Conan Doyle and Haggard.

Description : This volume addresses issues raised by Katherine Mansfield's nomadic rootlessness as an 'extraterritorial' writer. Contributions draw on postcolonial and diasporic frameworks to examine Mansfield's insights into colony and empire.

Description : Postcolonial Odysseys: Derek Walcott’s Voyages of Homecoming highlights the importance of the trope of voyaging in Derek Walcott’s poetics, primarily as it pertains to the poet’s engagement with classical verse. Focusing specifically on the engagement with Homeric myth, and The Odyssey in particular, it articulates the manner in which Walcott’s postcolonial reconfigurations of epic verse both highlights the endurance of the classics as well as demonstrating how cultural practices can remake and transform ancient texts. Concomitant with the poet’s presentation of self as divided, this study traces opposing forces in operation within this trope: a centrifugal force that corresponds to the outward journey away from his island home in search of greater publishing opportunities and broader readerships, and a centripetal force corresponding to the return journey, or homecoming. The enabling potential of Greek myth is marked by a similar to-ing and fro-ing in Walcott’s verse as he repeatedly engages with, and simultaneously disavows, Homeric configurations. Insisting on the reciprocal nature of poetic appropriation, the act of rewriting also signalling new ways of rereading, Walcott’s appropriations effectively enter into a critical dialogue with Homeric verse. Further depth to Walcott’s rewriting of Homer is provided by an analysis of the mediating influence of Euro-American modernism. Through an examination of the postcolonial aftermath of modernism, it challenges the perceived exclusivity of each, illustrating this premise through case studies of Walcott’s relation to both Romare Bearden and James Joyce. This study is therefore interdisciplinary and inter-artistic in nature, transgressing the borderline between poetry and prose, and that of literary and artistic disciplines. Highlighting the permeability of such boundaries, it investigates the journey of Odysseus, as prototypical wanderer, through time and space, from oral to print culture, from word to image.

Description : In this first scholarly work on India's great modern poet, Laetitia Zecchini outlines a story of literary modernism in India and discusses the traditions, figures and events that inspired and defined Arun Kolatkar. Based on an impressive range of archival and unpublished material, this book also aims at moving lines of accepted genealogies of modernism and 'postcolonial literature'. Zecchini uncovers how poets of Kolatkar's generation became modern Indian writers while tracing a lineage to medieval oral traditions. She considers how literary bilingualism allowed Kolatkar to blur the boundaries between Marathi and English, 'Indian' and 'Western sources; how he used his outsider position to privilege the quotidian and minor and revived the spirit of popular devotion. Graphic artist, poet and songwriter, storyteller of Bombay and world history, poet in Marathi, in English and in 'Americanese', non-committal and deeply political, Kolatkar made lines wobble and treasured impermanence. Steeped in world literature, in European avant-garde poetry, American pop and folk culture, in a 'little magazine' Bombay bohemia and a specific Marathi ethos, Kolatkar makes for a fascinating subject to explore and explain the story of modernism in India. This book has received support from the labex TransferS: http://transfers.ens.fr/

Description : In Migrant Modernism, J. Dillon Brown examines the intersection between British literary modernism and the foundational West Indian novels that emerged in London after World War II. By emphasizing the location in which anglophone Caribbean writers such as George Lamming, V. S. Naipaul, and Samuel Selvon produced and published their work, Brown reveals a dynamic convergence between modernism and postcolonial literature that has often been ignored. Modernist techniques not only provided a way for these writers to mark their difference from the aggressively English, literalist aesthetic that dominated postwar literature in London but also served as a self-critical medium through which to treat themes of nationalism, cultural inheritance, and identity.