Description : The amount of money flowing through U.S. politics continues to astound. "While not all expenditures are reported," writes David Magleby, "our best estimate is that at least $8 billion was spent in the 2012 federal elections." In this essential volume, the latest in a quadrennial series dating back to 1960, Magleby and his colleagues reveal where all this the money came from, where it went, what were the results—and why it matters. Anthony Corrado examines the most important changes and legal challenges to the law and regulation of campaign finance leading up to the 2012 election. John Green, Michael Koehler, and Ian Schwarber discuss the dynamics and funding of the Republicans' presidential nomination contest as well as the Obama campaign's activity—including the role his Priorities USA "Super PAC" played in negatively defining Romney. Candice Nelson examines in considerable detail how each side raised and spent its funds and the implications of their different approaches. Paul Herrnson, Kelly Patterson, and Stephanie Perry Curtis explore the financing of congressional elections. Diana Dwyre and Robin Kolodny examine the ways political parties raised and spent money through their national committees, including congressional campaign committees. Jay Goodliffe and Magleby examine how interest groups raised and spent money—closely examining the effect of the new Super PACs. How did these organizations raise more than $828 million, and how did they allot the $609 million they reported spending, and to what effect? Thomas Mann concludes with a summary of lessons recently learned regarding the financing of federal elections. What changes should be made to the system, and what institutional steps would they require?

Description : In this first scholarly reflection on the 2012 elections, a distinguished cast of contributors enlightens students, scholars, and serious political readers about the issues involved in one of the most polarised presidential elections in history. The book includes groundbreaking research on e-politics and online fund-raising, the role of race, class, and gender, and the influence of the Tea Party, Occupy, the economic crisis, and other actors and factors in the election. Characterised by diversity, liveliness, and data-informed analysis, Winning the Presidency 2012 captures the highlights as well as looking ahead.

Description : With new and revised essays throughout, Campaigns and Elections American Style provides a real education in practical campaign politics. In the fourth edition, academics and campaign professionals explain how campaign themes and strategies are developed and communicated, the changes in campaign tactics as a result of changing technology, new techniques to target and mobilize voters, the evolving landscape of campaign finance and election laws, and the increasing diversity of the role of media in elections. Offering a unique and careful mix of Democrat and Republican, academic and practitioner, and male and female campaign perspectives, this volume scrutinizes national and local-level campaigns with special focus on the 2012 presidential and congressional elections. Students, citizens, candidates, and campaign managers will learn not only how to win elections but also why it is imperative to do so in an ethical way. Perfect for a variety of courses in American government, this book is essential reading for political junkies of any stripe and serious students of campaigns and elections.

Description : The CQ Press Guide to U.S. Elections is a comprehensive, two-volume reference providing information on the U.S. electoral process, in-depth analysis on specific political eras and issues, and everything in between. Thoroughly revised and infused with new data, analysis, and discussion of issues relating to elections through 2014, the Guide will include chapters on: Analysis of the campaigns for presidency, from the primaries through the general election Data on the candidates, winners/losers, and election returns Details on congressional and gubernatorial contests supplemented with vast historical data. Key Features include: Tables, boxes and figures interspersed throughout each chapter Data on campaigns, election methods, and results Complete lists of House and Senate leaders Links to election-related websites A guide to party abbreviations

Description : In 2015, well over half of the money contributed to the presidential race came from roughly 350 families. The 100 biggest donors gave as much as 2 million small donors combined. Can we still say we live in a democracy if a few hundred rich families provide a disproportionate shares of campaign funds? Congress and the courts are divided on that question, with conservatives saying yes and liberals saying no. The debate is about the most fundamental of political questions: how we define democracy and how we want our democracy to work. The debate may ultimately be about political theory, but in practice it is conducted in terms of laws, regulations, and court decisions about super PACs, 527s, 501(c)(4)s, dark money, small donors, public funding, corporate contributions, the Federal Election Commission, and the IRS. Campaign Finance: What Everyone Needs to Know® explains those laws, regulations, and Supreme Court decisions, from Buckley v. Valeo to Citizens United, asking how they fit into the larger discussion about how we want our democracy to work.

Description : The 2012 American elections were highly competitive, with the unusually close partisan balance making the elections an opportunity for each of the two major parties. This book assembles leading political scientists and political journalists to explain the 2012 election results and their implications for America’s future. In addition to assessing election results, the book examines the consequences of the large ambitions of the Obama presidency and the political and policy risks entailed in the pursuit of those ambitions. It also explores Congressional elections and policymaking since 2008, and how they affected election results in 2012. The book promises a more coherent focus than that evident in similar edited works, achieved through a limited number of chapters and clear definition of chapter content.

Description : This book helps identify and explain how the new federal campaign finance rules changed the way campaigns were run and paid for in 2012, along with shifting the balance of power from political parties to third-party interest groups. 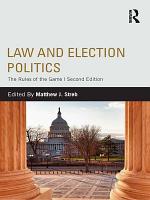 Description : Though the courts have been extremely active in interpreting the rules of the electoral game, this role is misunderstood and understudied—as, in many cases, are the rules themselves. Law and Election Politics illustrates how election laws and electoral politics are intertwined, analyzing the rules of the game and some of the most important—and most controversial—decisions the courts have made on a variety of election-related subjects. More than a typical law book that summarizes cases, Mathew Streb has assembled an outstanding group of scholars to place electoral laws and the courts‘ rulings on those laws in the context of electoral politics. They comprehensively cover the range of topics important to election law—campaign finance, political parties, campaigning, redistricting, judicial elections, the Internet, voting machines, voter identification, ballot access, and direct democracy. This is an essential resource both for students of the electoral process and scholars of election law and election reform.

Description : Using data and examples from the 2008 election, and laced with previews of 2012, this text offers an overview of the presidential election process from the earliest straw polls and fundraisers to final voter turnout and exit interviews. The coverage includes campaign strategy, the sequence of electoral events, and the issues, all from the perspective of the various actors in the election process voters, interest groups, political parties, the media, and the candidates themselves.