Description : Vols. for 1871-76, 1913-14 include an extra number, The Christmas bookseller, separately paged and not included in the consecutive numbering of the regular series.

Description : A provocative and hauntingly powerful debut novel reminiscent of Sliding Doors, The Bookseller follows a woman in the 1960s who must reconcile her reality with the tantalizing alternate world of her dreams. Nothing is as permanent as it appears . . . Denver, 1962: Kitty Miller has come to terms with her unconventional single life. She loves the bookshop she runs with her best friend, Frieda, and enjoys complete control over her day-to-day existence. She can come and go as she pleases, answering to no one. There was a man once, a doctor named Kevin, but it didn’t quite work out the way Kitty had hoped. Then the dreams begin. Denver, 1963: Katharyn Andersson is married to Lars, the love of her life. They have beautiful children, an elegant home, and good friends. It’s everything Kitty Miller once believed she wanted—but it only exists when she sleeps. Convinced that these dreams are simply due to her overactive imagination, Kitty enjoys her nighttime forays into this alternate world. But with each visit, the more irresistibly real Katharyn’s life becomes. Can she choose which life she wants? If so, what is the cost of staying Kitty, or becoming Katharyn? As the lines between her worlds begin to blur, Kitty must figure out what is real and what is imagined. And how do we know where that boundary lies in our own lives? 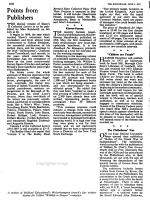 Description : Vols. for 1871-76, 1913-14 include an extra number, The Christmas bookseller, separately paged and not included in the consecutive numbering of the regular series. 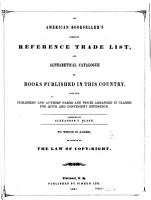 Description : The revival of independent bookselling has already begun and is one of the amazing stories of our times. Bookseller Andy Laties wrote the first edition of Rebel Bookseller six years ago, hoping it would spark a movement. Now, with this second edition, Laties’s book can be a rallying cry for everyone who wants to better understand how the rise of the big bookstore chains led irrevocably to their decline, and how even in the face of electronic readers from three of America’s largest and most successful companies—Apple, Amazon, and Google—the movement to support locally owned independent stores, especially bookstores, is on the rise. From the mid-1980s to the present, Andy Laties has been an independent bookseller, starting out in Chicago, teaching along the way at the American Booksellers Association, and finally running the bookshop at the Eric Carle Museum in Amherst, Massachusetts. His innovations were adapted by Barnes & Noble, Zany Brainy, and scores of independent stores. In Rebel Bookseller, Laties tells how he got started, how he kept going, and why he believes independent bookselling has a great future. He alternates his narrative with short anecdotes, interludes between the chapters that give his credo as a bookseller. Along the way, he explains the growth of the chains, and throws in a treasure trove of tips for anyone who is considering opening up a bookstore. Rebel Bookseller is a must read for those in the book biz, a testament to the ingeniousness of one man man’s story of making a life out of his passionate commitment to books and bookselling.